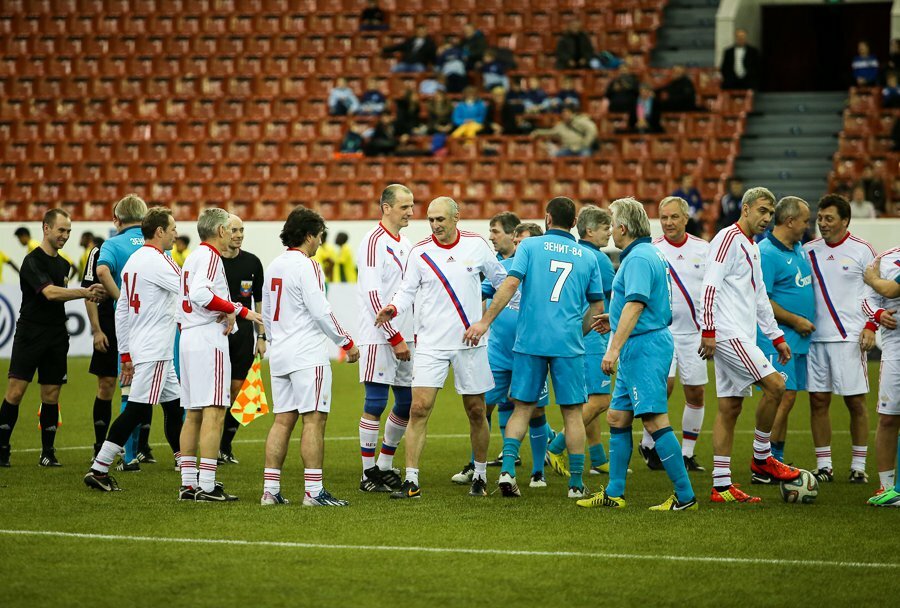 It is known that the playing calendar of the XXIV Commonwealth Cup contains 16 matches featuring eight national teams with players not older than 22 years. But we may have to remind that on Saturday, 23rd of January – when this Commonwealth Cup is coming to an end – the stadium will host an additional 17th match, where the SCC pitch will see footballers of quite a different age group and of quite a different football authority.

Veterans' teams of Russia and St. Petersburg will meet on 23rd of January at 15 hh 15 mm on the artificial SCC pitch. Those spectators who'll choose to watch the game are guaranteed not to leave disappointed. Yes, this certain match will not feature high speeds on the pitch. But filigree techniques, good pitch viewing and brilliant "mate sense" just cannot disappear from the masters' arsenal of SUCH a level.

So, which stars of the Soviet and the Russian football will we see in the SCC on Saturday? Of course, the fact that 99% of team St. Petersburg will consist of the former Zenit players, the core of the team formed by the legendary Zenit-84 team players (Leningrad celebrated its first ever gold of the USSR Football Championship that year) is a Polichinelle's secret. Vladimir Klementyev, Yury Gerasimov, Sergey Dmitriyev, Boris Chukhlov, Arkady Afanasiev, Sergey Vedeneev and their comrades in the glorious champion team will surely have a play on Saturday to salute the SCC spectators. But since Klementyev, for example, has recently celebrated his 60th birthday and since Moscow has brought younger players, the home team has logically completed the lineup by representatives of the following football generation, also beloved by all St. Petersburg supporters: Aleksandr Gorshkov, Sergey Gerasimets, Dmitri Radchenko, and Andrey Pletnev...

The away team will also have their "base club" in this match. Its name can be guessed from the first attempt, for the coach of the Moscow delegation is Alexander Mirzoyan, a popular former back of Spartak. The team has a variety of football stars: there's Sergey Gorlukovich, the Olympic Champion, just to mention! The defense will also be represented by Spartak: Dmitri Khlestov and Yevgeni Mileshkin, as well as Erik Yakhimovich from Dynamo and Akhrik Tsveiba who has played for all the possible Dynamo teams, and Aleksandr Shmarko who used to be a back for Rotor Volgograd. Well, and almost the entire goals of the team will be occupied by the impressive figure of Valery Novikov, once a brilliant CSKA goalkeeper.